The most accredited theory on the Multiverse, since it is closer to data and measurements, is Eternal Inflation. According to this theory, the universes would rise from a Parent Universe composed of Quantum Foam, which would boil due to quantum fluctuations generating bubbles and wormholes. Depending on the intensity of the fluctuation, the bubble swells and contracts like a balloon, but if it surpasses a certain critical threshold, it expands long enough to allow the formation of the matter and cosmic structures we are used to. Also, in this case, the existence of a massive number of universes would explain the order and precision of ours, characteristics that led to the formation of Life and probably present just in a few other universes.

A variation to this theory made by Andrei Linde adds that these bubble-confined universes are subject to eternal inflation, meaning that they continue to expand faster and faster as it seems to be happening to ours. This exponential expansion means that in some areas of this universe the deformation of space-time leads to the formation of a new bubble and a temporary opening towards the new universe: after some time, this bubble detaches and forms an independent and disconnected universe from the native one. For the observers placed within the new world, this event of origin can be compared to something like the Big Bang: our Big Bang would therefore merely represent the moment of creation of the observable universe as seen from Earth. Sometimes, however, the bubbles can touch and affect spacetime by producing new energy. 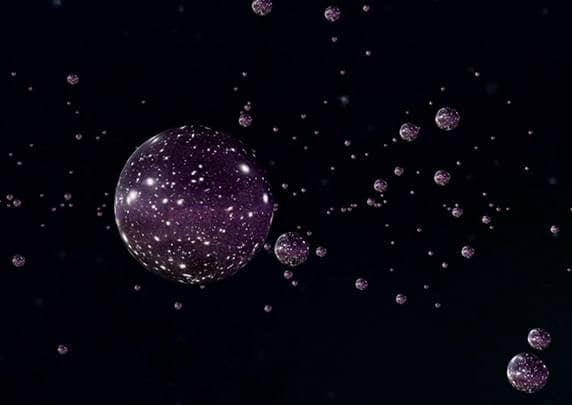 Several universes float in the parent universe like bubbles

Unknown – Inside the Perimeter