DEVELOPMENT OF THE BIG BANG THEORY

The formulation of the Big Bang Theory required several steps and discoveries that helped to create the model of the Universe we now believe to be the most correct.

Without going too much back in time, let's start from when Einstein proposes a model based on the Theory of General Relativity in 1917. It is a stationary model where gravity is a curvature in spacetime. To put it simply, it is a bit like placing a big marble ball on an elastic fabric, like a trampoline: the fabric will bend. If another, smaller marble was thrown at the right speed on this curvature, it would roll along the circumference of the bending: from above it would be as if the small marble ball rotated around the large one. 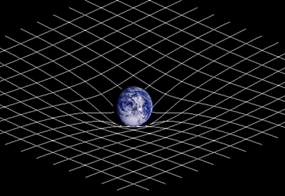 This simplification trivializes gravity too much, but for now it is enough.

At the time, the most supported model  by the scientific community is the Steady-State Model, according to which the Universe is infinite and doesn’t have a beginning or an end. Edwin Hubble, however, does not agree: his studies show that galaxies are moving away and the farther they are, the faster they fly. This proves that the Universe is expanding, and if it gets bigger: it means that before it was smaller and it had a beginning.

In 1927, the priest and astronomer George Lemaitre takes up the idea that an ever-expanding Universe can be traced back to an original moment in which everything is condensed into one point, the Primeval Atom. However, given that at the time the Steady-State Model dominates the academic world, the hypothesis that everything started from a point that then expanded is ironically dubbed as the Big Bang Theory.

In 1929 Edwin Hubble, analysing the lights of the galaxies, discovers they tend towards red. This means that their wavelength lengthens, and that therefore the light source, the galaxies, are moving away. A discovery that seems to confirm the hypothesis of an expanding Universe.

Subsequently, George Gamow hypothesizes a great explosion, where matter, being put in conditions of extreme temperature and density, causes the Big Bang that leads to the expansion and creation of today's Universe.

The key moment, however, comes in 1965, when the antennas built by Penzias and Wilson, for experiments on satellite communication, detect a temperature of 3.5 K despite pointing towards nowhere. This disturbance, being homogeneous in every point of the sky, is recognized as the Cosmic Background Radiation, emitted directly from the new-born Universe. The accidental discovery anticipates a Princeton team that has just begun to build antennas to detect the radiation just a year earlier.

Although the supporters of the Steady-State Model believe the radiation is caused by the reflection of starlight from remote galaxies, from this moment on the Big Bang Theory begins to be accepted almost universally, since the emanation is the proof that the Universe had a beginning.

The hypothesis currently most accredited for the origin of the Universe is Alan Guth's Theory of Inflation, which is also based on the research of Stephen Hawking and was proposed in 1979 and supported by some experiments made in Harvard University in 2014. According to the Theory of Inflation, a gravitational singularity, born from a quantum fluctuation, causes an explosion in a chaotic pre-Universe, which swells with extraordinary rapidity, especially in the first second, and then continues to expand progressively giving rise to a Universe in expansion where matter is unevenly distributed.

This expansion initially slows down, as the mass of the cosmos increases and so does its gravity, but after a few billion years inexplicably it reverses its trend and accelerates, as if the Universe was attracted by an anti-gravitational force, that we call dark energy.