A hypothesis indicating the existence of multiple universes is then more rigorously re-presented by Hugh Everett III in 1957 with the Many-Worlds Interpretation. This one opposes the Copenhagen Interpretation, according to which the unpredictability of quantum mechanical measurements is not due to our ignorance of hidden laws, but to the fact that they are dictated by chance.

The Many Worlds Interpretation, on the other hand, tries to overcome the problem of the interaction between the observer and what is observed: for example, Heisenberg's Uncertainty Principle tells us that it is not always possible to determine the right values of two incompatible variables, but it is necessary to choose which measurement to privilege. For example, we can know either the position or the speed of a particle, but not both, since to find its position, we must illuminate it with a beam of light and therefore, since light is energy, give it an impulse that would modify its motion.

Consequently, the observation of the phenomenon becomes part of the physical system itself, so much that it can be assumed that nature cannot exist without an observer that keeps measuring it: George Berkley even declares there is no existing entity of any kind that can be independent of the observation-perception system.

Everett, then, considers the system and the observer as a single world: at the moment of the observation, following the interaction between the two, every possible result of the measurement is a world. Consequently, there will be no random result, but simply one value that will result in one world, and a different one that will result in another world. These universes may also have the same physical laws and fundamental constants but cannot communicate. 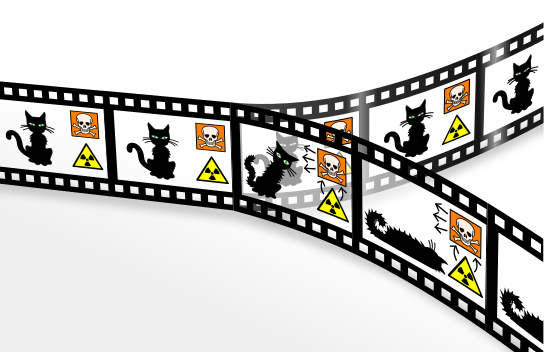 Representation of the Many Worlds Interpretation: the Schrodinger’s cat is a quantum event that create new universes according to its possibilities. Therefore, now we have a universe in which the cat is dead, while in the other the cat is alive