DESTINY OF THE UNIVERSE - 3

This scenario features a symmetrical ending to the Big Bang. Indeed, according to this model, the gravity of the Universe will cause it to collapse on itself. What will happen when the Universe begins to contract is unknown, but it is estimated that all the existing matter will collapse into a gravitational singularity point, just as everything was born billions of years ago. Probably, in the final moments, matter and energy will dissolve and black holes absorb what remains, getting bigger and bigger until they evaporate.

The Universe of the last minutes, therefore, would not be at all analogous to that of the first ones. As soon as everything has collapsed into this singularity, another Bing Bang could kick off a new universe, in an infinite cycle in which ours would be only one of the many worlds that are generated one after the other. This hypothesis, however, is the most unlikely, since it violates the Second Law of Thermodynamics, according to which the most probable ending is the Thermal Death. The Big Crunch, on the other hand, would require the Universe to be Closed, which is something going against current observations and evidence, that suggest us cosmos continues to accelerate its expansion, not to slow it down. 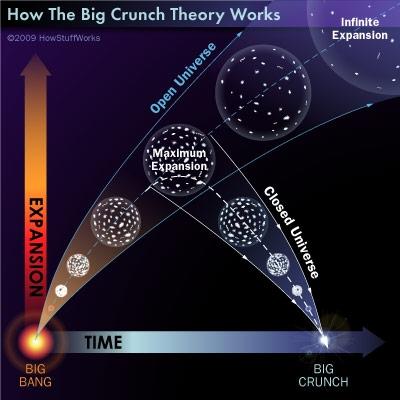