DESTINY OF THE UNIVERSE - 2

Currently, the growth rate of the Universe, defined by the Hubble Constant, is not high enough to dismantle local structures, as are galaxies, which are held together by gravity. Therefore, space is simply produced between them. However, if the constant continues to tend toward infinity, the fate of any object in the Universe, no matter how small, would be to be disintegrated.

So, in detail, what would happen? These are all suppositions, but it is hypothesized that, initially, galaxies separate from each other, thus dismembering the super-clusters they formed. Later, gravity cannot longer even hold galaxies together, and star systems separate, each following its star. Three months before the end of the Universe, even the planets abandon the stars. In the last few minutes, stars and planets are disintegrated and, when is left a half-second, even atoms are destroyed. The Universe becomes an immense gas without gravity, made of a series of elementary particles, isolated from each other, and lacking any possibility of interacting.

According to some, at this point, parallel universes go on existing, for others time, dimensions and distances are cancelled, and there is a new Big Bang, continuing a perennial cycle of destruction and regeneration. Indeed, each of these particles could become a singularity and give life to a new universe with a Big Bang and, therefore, our own Universe could be a particle that is part of a Parent Universe. The Big Rip can happen in a Flat or Stationary Universe. 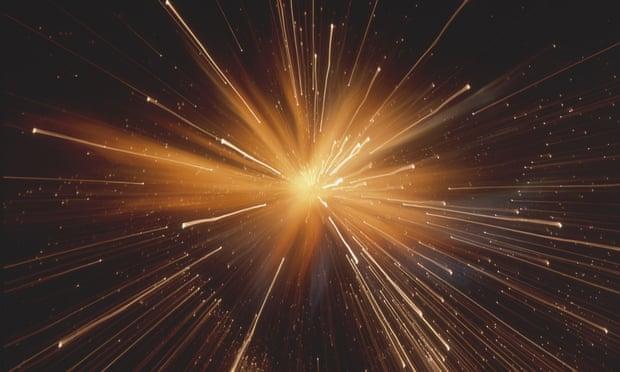 Representation of a star disintegrated in the Big Rip